When you purchase your ComeUp Automotive or Powersports Winch, the rope will be installed in such a way that the rope winds on and off from the bottom of the drum spool (see Figure 1). This configuration is referred to as underwound. Operating the winch with the rope coming off the top of the drum (overwound) is discouraged for three reasons.

For these reasons, operating your winch in the overwound orientation could void any warranty and present a very dangerous situation. 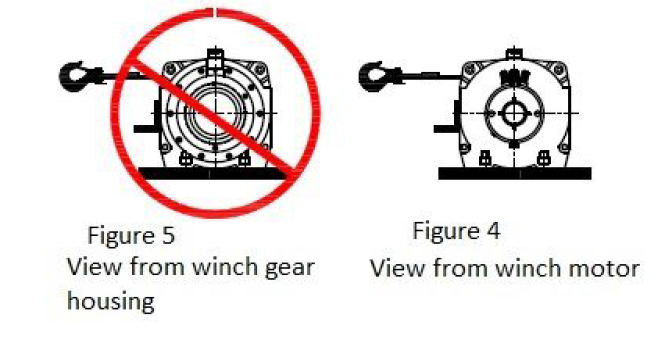 If your mount system has a front supporting rail or other structural member which provides sufficient strength to support the winch on the pulling side of the winch, it may also be acceptable to mount the winch in an overwound orientation. Figure 4 shows the proper rope direction, looking at the winch motor end. The “L” shaped feature represents a solid support which must be part of the entire mounting structure. Figure 5 shows an improper orientation where the drum will rotate in the wrong direction as described in #2 above.

A DV-12 winch, mounted with feet downward, using the standard (4) bolt 4-1/2 by 10-inch pattern, with 12,000 pound rated load applied to the rope when it was near one of the drum flanges and on the first layer against the bare drum: